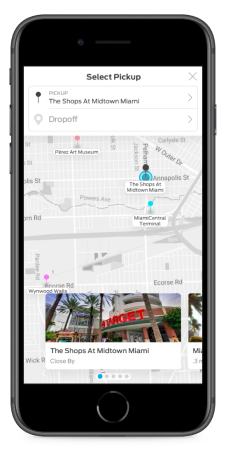 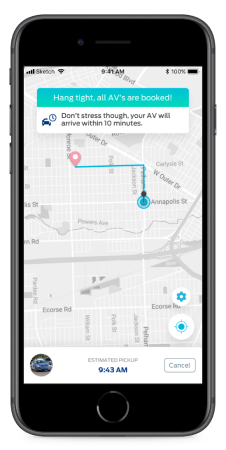 The Miami Expeirence was Ford AV's first major event where Argo AI (an autonomous vehicle company acquired by Ford) was showing off the progress that they had made with their autonomous vehicles. As the first product designer in Ford AV, I was tapped to create the app that would allow those invited to the event to call an AV and use it to trave to pre-selected locations. This was the first time that I had worked with a purely mobile application, and this proved to be a fun and somewhat challengeing experience.

Initially, there weren’t many requirements given to me. I did know that there was a fixed list of locations that users could be picked up to and dropped off at, and that users needed to see their current location whenever possible. I initially based this ridehailing app on an internal shuttle app, but scrapped my initial effort due to the fact that I wanted to try creating a UI that would be a significant departure from an existing ridehailing app. I ended up coming up with a system that defaulted to the destination selection screen. On this screen, I let the user select a dropoff location by either clicking on a pin on the map, or by tapping a card at the bottom of the screen.

Once the location was selected, the card carousel would immediately scroll so that the selected card was at the center of the screen, and then expand upwards so that it covered the carousel, but would show additional details like the initial address, distance from the current location, as well as the closest attraction (a restaurant, public park, etc) to the dropoff location. Once the user selected the destination, they were taken to a screen where they could edit both their pickup and dropoff location, as well as view their estimated arrival time.

After showing stakeholders the initial wireframes in order to get their buy in, I redid them in higher fidelity, uploaded the screens into Invision, and started wiring up some basic interactions. Originally there were more tasks that we wanted to test for, however they had to be descoped due to time constraints. I had 3 goals for these user testing sessions:

Upon the conclusion of usability testing, the following two issues became apparent:

After getting this feedback, I decided to make two major changes. The first change was to make the initial screen after loading resemble a more traditional ridehailing app, with an area that would show both the pickup and dropoff locations. This is what the internal Ford shuttle ridehailing app did, and while I wanted to move away from that interface, it turns out that it was simply a better experience for the user. The second major change was to reduce the information on the bottom card when the user was waiting for the AV to pick them up. This was done in order to show the Cancel button without requiring the user to expand the card and show the cancel option. 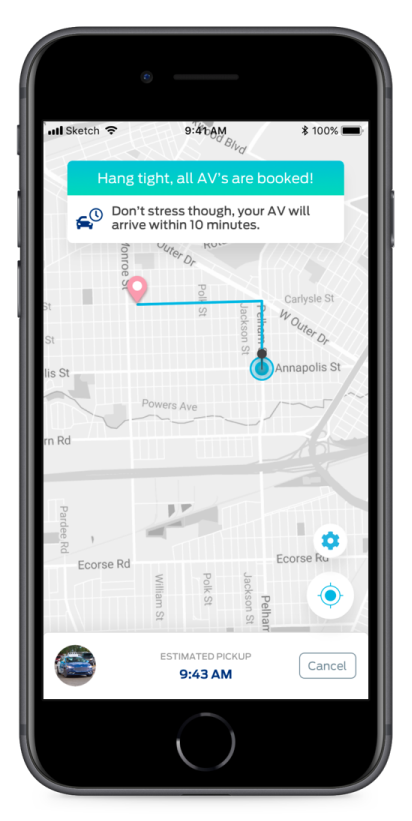 While I was conducting the user testing, a new requirement for adding the ability to switch languages was added to our backlog. When I worked on the mockups to resolve the issues that testing brought out, I also added a floating settings button that when pressed would bring up a small menu that allowed the user to switch between English and Spanish on the fly. For the second round of testing, I added a task that required the user to change the language settings of the app from English to Spanish. This round of testing proved not only that my changes were able to solve the users problems, but also that the language settings were easy to access. 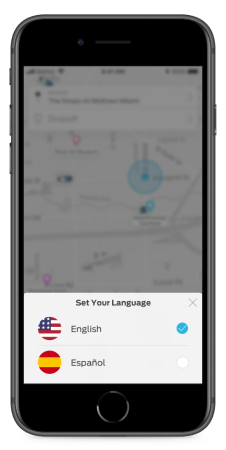 Mockup of the language selection screen. 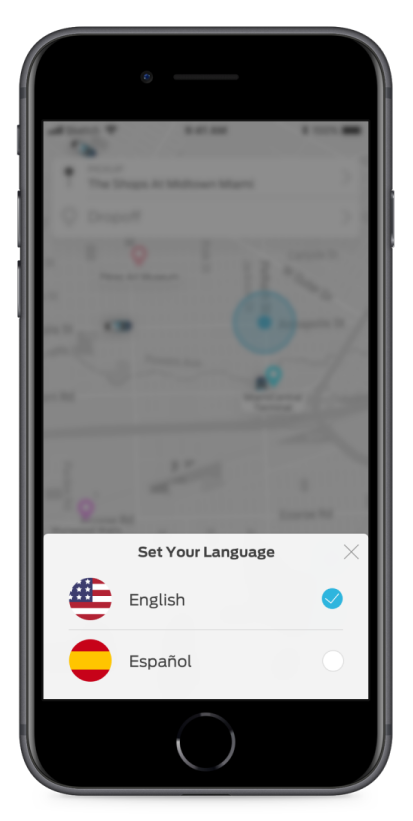 Mockup of the language selection screen.

During the week of the event, multiple journalists, business people, and government officials took part in the Miami Experience. The Verge, Quartz, and PC Mag all ran articles on the event in which they mentioned the app as being Uber-like. CNet also produced a video where the app can be seen from 1:42 to 1:52.

Overall, I’m pleased with how this project went. It was great to see that the participants of the event were able to use the app without any issue, and that it was compared to the leading ride hailing apps in a positive light. If I could have done anything differently, I would have done additional usability testing. The one round of usability testing that I did was very helpful, and I believe that a second round could have not only identified areas of the app that could have been improved, but would have also identified features that users may have wanted it to have.